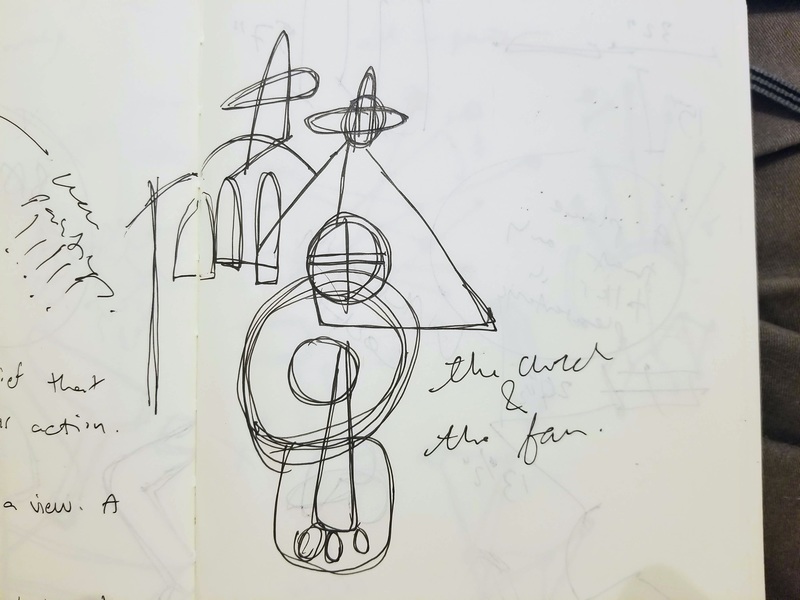 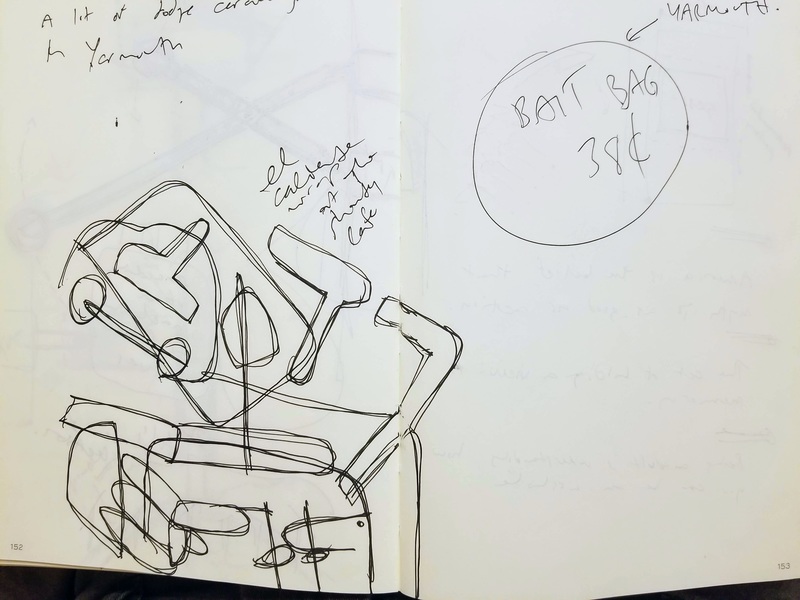 I had a wrap and an iced tea. Car was a Dodge. Also what a deal on bait bags, right? 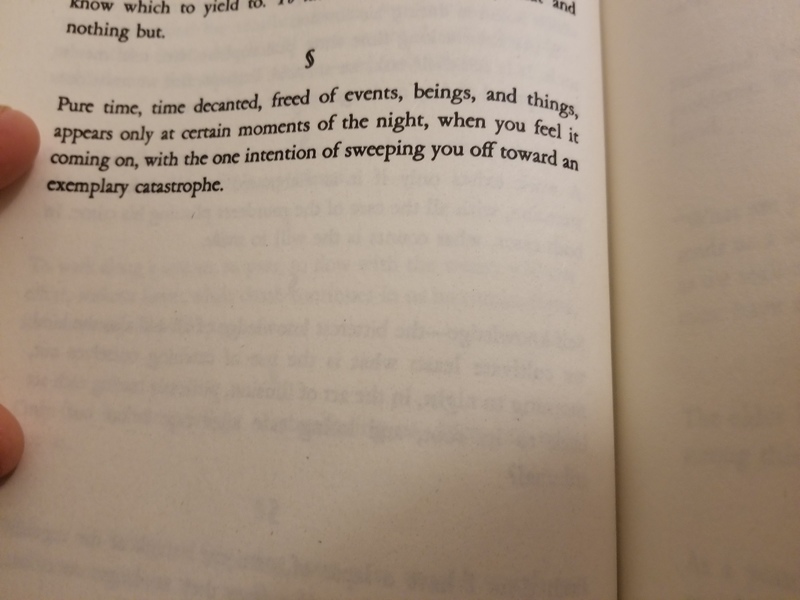 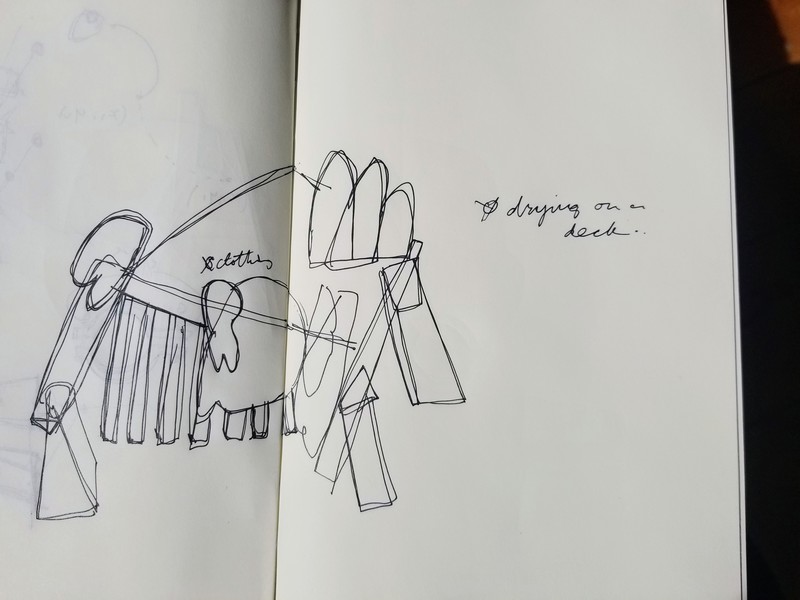 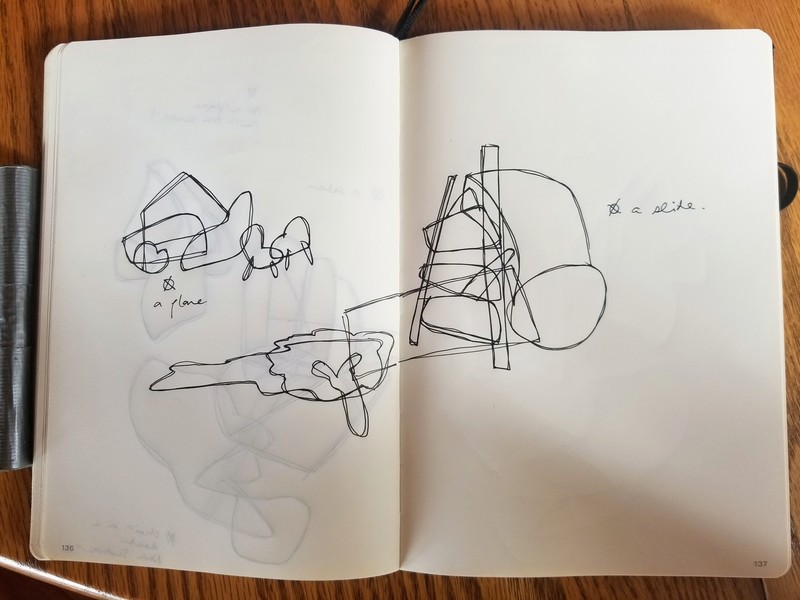 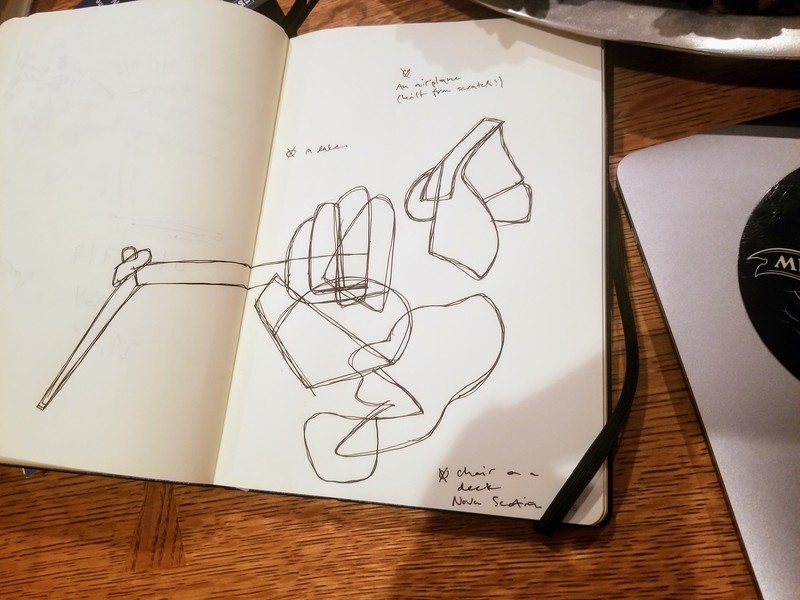 My dad made my sister and me this set of blocks when we were kids. The blocks were all worn with pleasant edges and could be stored in a cart he made, also of wood, that had a slat bottom and wood wheels that were made on a lathe; the wheels were dark wood, the inner hubs a light wood.

I imagine kids start playing with blocks right after they can start to see some colors in the world. I read somewhere that at first kids just see dark and light shapes, with this perception slowly morphing into known shapes and colors, and then off we are to the races, making block castles.

It seems to me that at each of these stages of development we become able to order some part of our inner or outer space in a new way. When the world is made of black and white shapes — when we are newborns and staring wide eyed in amazement at what is just a pot on the stove — we order things maybe in the most basic of spacial ways; something is near or far to something else. Getting to blocks things get a bit more 3D: Stuff goes on top of, next to, under. We suddenly live in a world of luxurious prepositions.

But I think that the blossoming of subjective experience is maybe just an expansion of the types of blocks we can order. Relationships are blocks, political beliefs, really anything of value can be a block. And when I think about the idea of something like consciousness extending through all of space, I just think of the small withdrawn piece of all objects having an ability to place itself in relationship to other matter. And a relationship can be seen not only with eyes, but a stray electron bouncing off a closed eyelid. Or some Boson wandering from one space to the next.

Consciousness of all types, rising up to Thinking, is just an ordering of matter. How much a Thing (very broadly) can order is probably a lot of what we think of as being higher awareness or higher conscious engagement.

Recently I’ve been really into intuitionist mathematics, which I may or may not be digesting correctly, but part of its expression in the real world seems to be this continued feedback with measurement. An object can not have some property that exists with infinite decimal places of precision, but it can have infinite decimals added to some property with continued observation. In some sense this breaks the precision of an object, and maybe the object itself, into two parts: that which was measured and that which is still unknown. It’s a bit like if I had an entire jar of jellybeans and wanted to figure out how many there were, so I took jellybeans one at a time from the jar, placing each jellybean in a second jar. In front of me, I’d have two jars containing the entirety of an object called “jellybeans”.

I’ve been reading this book  by Peter Godfrey-Smith, “Other Minds”. There’s a long sub-title that I’ll leave off (what’s with subtitles in ALL books these days? I want to read something called “Stuff”.) It tackles the origins of consciousness by looking at the relationship between the development of the octopus brain versus the human brain. The book has gotten better as it’s gone on. The beginning seemed to be fluffing the rest of the book to get to 200 pages, but I’ve now gotten into the heart of it where it seems the author knows they’ll make it past the publisher’s requirement and is talking about some interesting stuff. (In some ways this reminds me of giving book reports in 8th grade, where the teacher wanted me to focus my presentation on conclusions I made from reading the book, but given that I didn’t have any, I’d just retell the story for the first 8 minutes of my 10 minute time.)

Besides all the fascinating facts about octopi (they can see with their skin!!) it’s interesting to think about a nervous system that has involved in a different evolutionary branch (we split 600 million years ago when we both were a worm-like creature) that seems to have not only made a creature that can interact with a physical word, but can also create an internal representation of that world in order for that animal to have a subjective experience maybe a bit like we do.

And when I think of building this internal world to mirror an external one and all of the default behavior that goes into that construction, it occurs to me how much the blocks we use to organize our experience matter in our ability to participate in a shared experience. While the blocks themselves become rigid the space in between their ordering can be impossibly large. The constructions we make can be extremely porous to those that don’t build with the same blocks. Scale matters. Values matter. Matter matters. 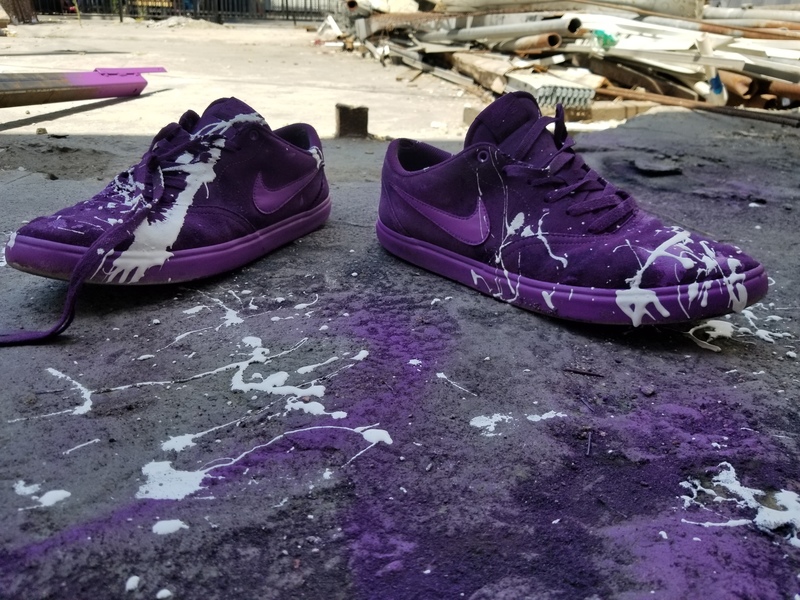 I had an ex-girlfriend who’s grandmother had her apartment decorated exactly as it was in 1952. I’ve been thinking about this room in its perpetual state of being a lot these days. It reminds me of some memory experiment where some scientists (psychologists?) take people over 75 into a testing room to recount old memories. When the scientists decorate the room just as it would have been in the time that these memories occur, the participants not only remember more but also began to FEEL and ACT as if they are in that time.

If my head was a drag net, cast from the railing of a fishing boat, there would be equal parts fish, dolphins and Greenland sharks pulled to the surface: things desired, things of fancy, and things too old to even know where they belong but which are probably at the root of everything. Those Greenland sharks with the crystalline structures in their eyes telling the story of every good thing and every bad thing, both small and large; inland murders, but also ice curling around whirls in water from an oar stroke. Something gentle and kept as a secret.

But my head would drift around and settle like pennies falling through counter top games for donations to charities that are old like the faded plastic water wheels that no penny has ever landed on. Shells grabbed by an octopus and flipped for head or tales, but the action is like watching muddy water settle (when I think of muddy water settling I think of teeth that are white smiling through dirty windows) and all of the sudden it’s just my head and a bunch of octopi looking around waiting for something. Who knows what.

Someone bar the door made of grooves of kayaks pulled onto beaches that smell of low tide.

Someone make sure the guests have napkins.