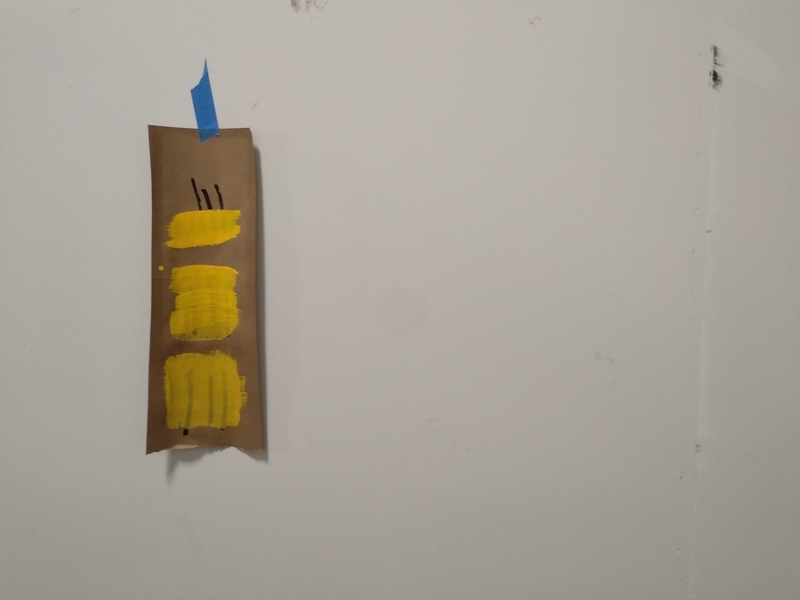 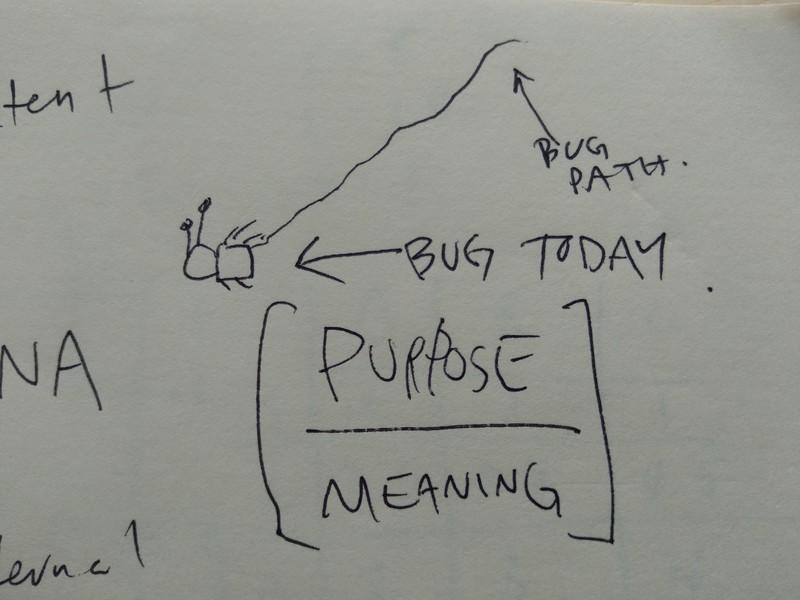 Railway timbers would be stacked four high nestled between about eight sets of tracks on my way to my studio. The pile was even except for one timber missing along the top row, giving the whole stack a bit of a creosote-sticky grin looking down rusted rails to discarded cars, each missing doors, windows or sometimes the entire side of the car. If I could zoom out a bit, the air would be paint the color of loose pollen and beeswax; stuck between two hills, one presenting a church with black towers like a piece of coal struck hard into a sidewalk and the other some peek into rolling hills melting over a rock formation.

I spent a lot of time walking back and forth across these train tracks, from bus stop to studio door, headphones in which fortunately only lead once to me almost getting leveled by an oncoming train. (This was written about a bit before.)

There were iterations to the walk.

The first walks happened while attached to a place that was new and hung with static electricity on parts of my body that didn’t know current. I would walk from an apartment with one bed built from two and balconies bobbing on air thick with possibility; boats above abandoned properties and stone walls. There were tall ceilings, cobblestone and forgotten parks and graveyards.

There were times of walking with love heavy and needy in my heart, glancing to windows I knew contained a person I loved: up in that corner studio with ugly green carpet and seemingly little light, although many windows. Sometimes we’d walk the rails and place metal in piles and sit inside cars seemingly cut in two in more ways than one: acting on a stage of a more modern stagecoach. (You always smelled good. Once we lay in bed and something like the smell of steamed broccoli drifted through the room, pungent and somewhere between good and bad, and you quickly put your hand between your legs and then smelled it declaring, “nope”.)

And then there were the last times I’ve walked those tracks where I wonder about wanting to keep things alive that are already past.

There was a moment once, when I laid up on those railway timbers, pretending like I was one. I had long hair and it stuck and matted into me and I lay there on my back head turned upside down looking at the ruins of a building on the horizon.  The air was thick and felt like somewhere you’d find a lot of grasshoppers, but there were only trains. I thought of weddings and kites and bobbing on the surface of the ocean where just my eyes would be above the water. I thought of times I smiled to someone in my kitchen and times I sat on night buses alone.

It felt good to be in that stack of railway ties. 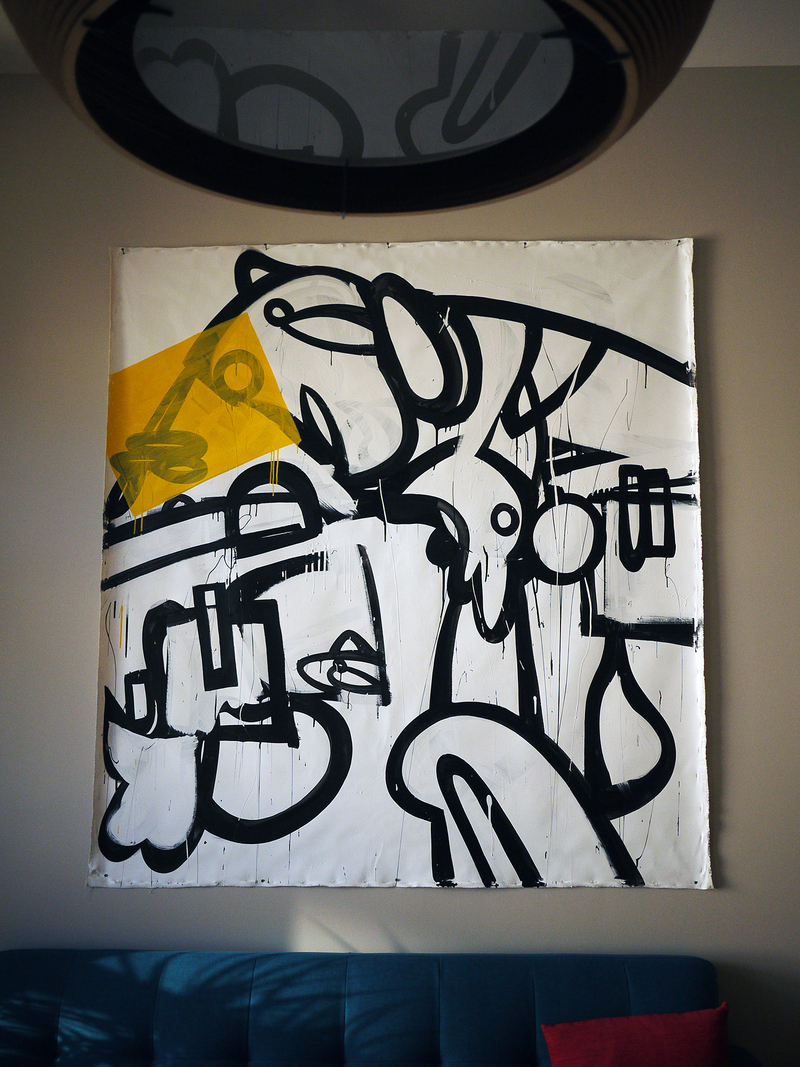 possible title, "in Berlin everyone's parents dream they are on a beach". 1.6m x 1.6m 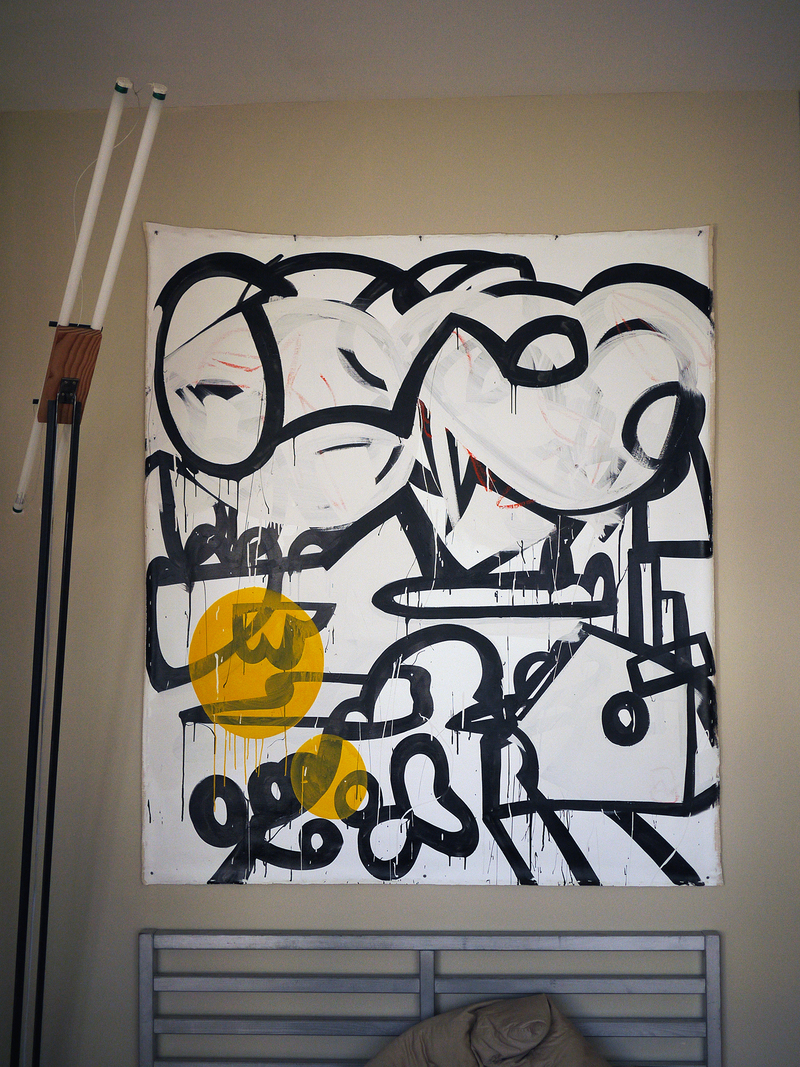 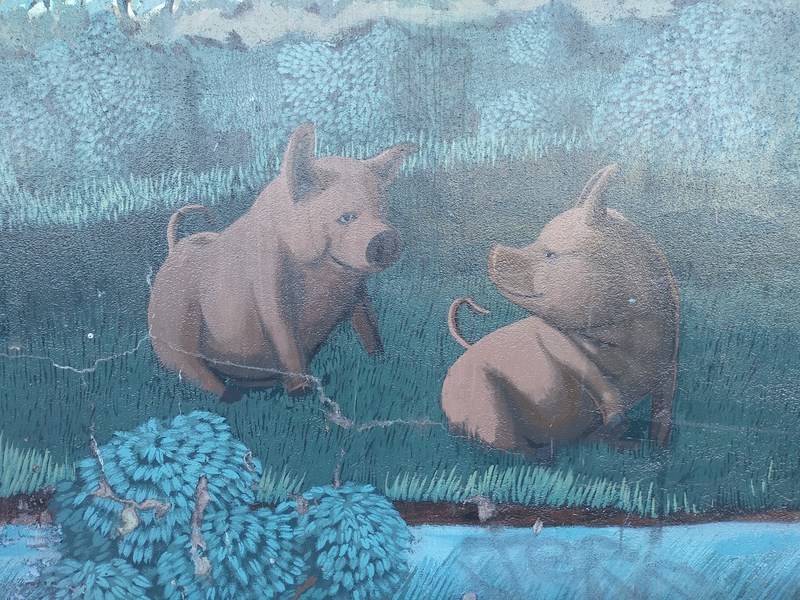 Lauren and Jean-Pierre met at a sex club in Berlin in 1996. They ended up on a three day bender that concluded in an old sewing machine factory in the former East. Both were blurry eyed and coming down from various pharmaceuticals. At that point Lauren was wearing only a ball-gag as a necklace and a single sock. Jean-Pierre was wearing a tiara full of fake diamonds, fake eyelashes and also a single sock. They realized the socks were a pair, as were they from that day onward. In the mural the ball-gag is puckishly referenced through shading around Lauren's neck. 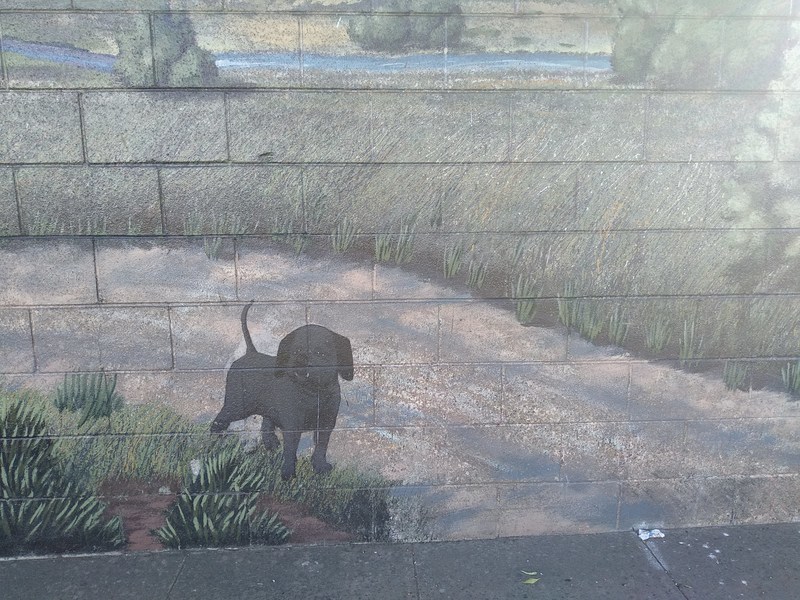 Martin used to be a bouncer in a bar in downtown LA. He was a pretty heavy drinker and passed out one night while on the job, knocking all of his teeth out on the railing that cordoned off the outdoor smoking section. (Some people that were there that night claim to still have some of his teeth. A regular, Nadia, says she wears one around her neck as a good luck charm while flying, but no one has ever seen it.) Martin arrived at the dentist the next day, but only had enough money to replace two of his teeth. He decided to just replace his bottom canines, which he now refers to as his "gothic towers" as the incident also brought with it a revelation about the existence of God. 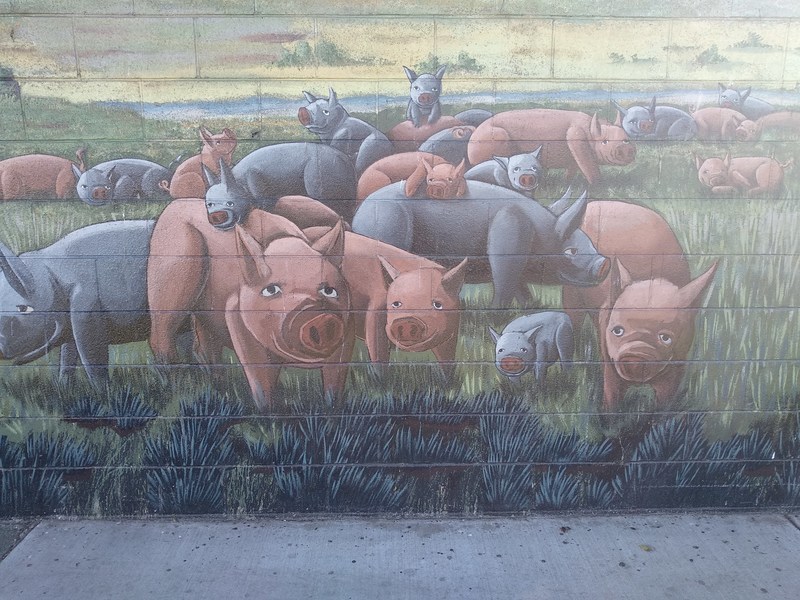 This was the last known picture of the Demala family before they boarded a train in rural Montana heading towards the interior of Canada for a family ski trip. A coupling issue between train cars caused the last car, which they were seated, to detach while the train traveled along an isolated area of its route. When the error was noticed and rescue workers rushed to the scene, they found an empty car stripped of all personal belongings except for a single ballet shoe. To this day the incident is still referred to as the Canadian Ballet Car Mystery. (It should be noted that none of the Demala family danced ballet and they were the only passengers assigned to that car.) 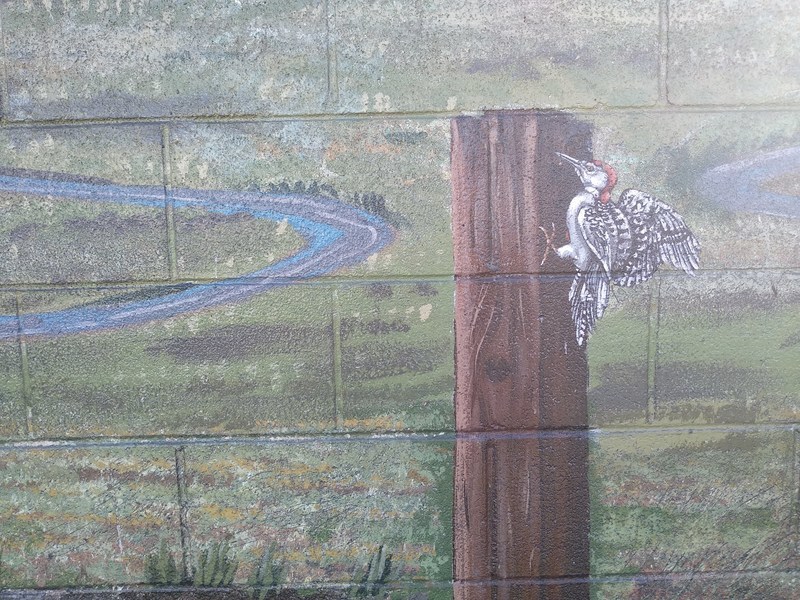 Monica believes that she has never seen a river in her life, but this is entirely due to her desire to always peck at the shadowed side of the fence post near her nest, causing this same post to block her view of the nearby river. Everyone in town calls her Short Sighted Monica. What they don't know is that the river that Monica sees in her head is beyond anything they could possibly hope to ever see. 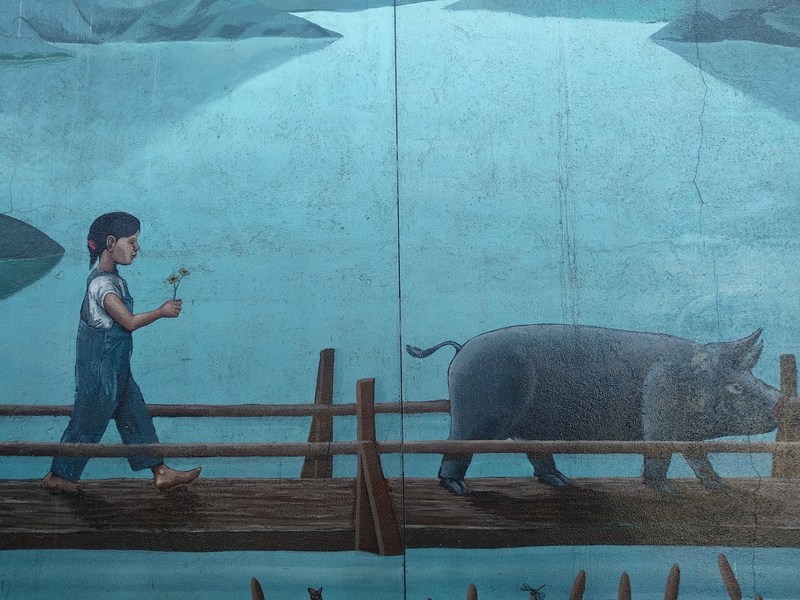 Raymond accidentally pushed Hannah off a pedestrian bridge while running from what he believed to be an oncoming winter storm. Hannah fell onto the log jam below the bridge and had her left arm crushed between two large timbers. Surgeons tried to save it, but unfortunately it had to be amputated. Raymond was so distraught from the incident that his skin turned a ghastly blue/grey. To this day Hannah tries to comfort Raymond and let him know he is forgiven by bringing him a flower every year on the anniversary of the event, but he only walks away to the site of the incident to sulk on his own. 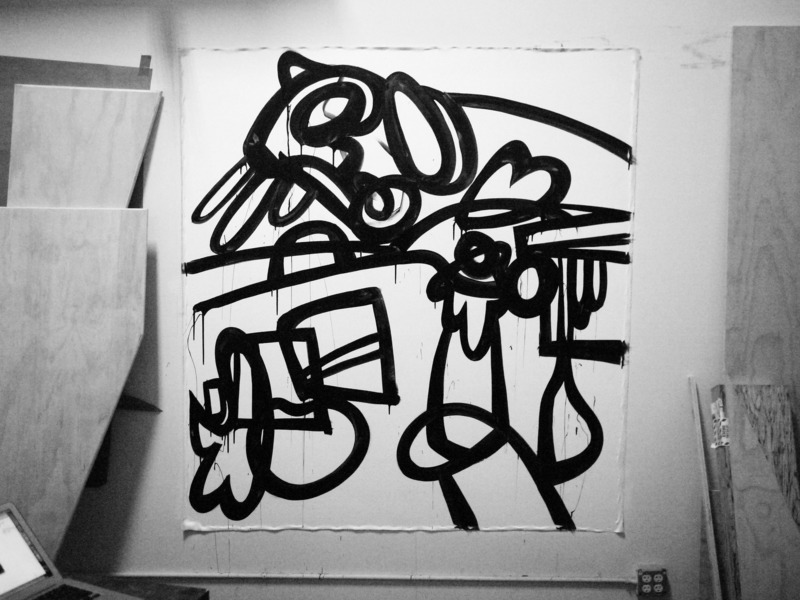 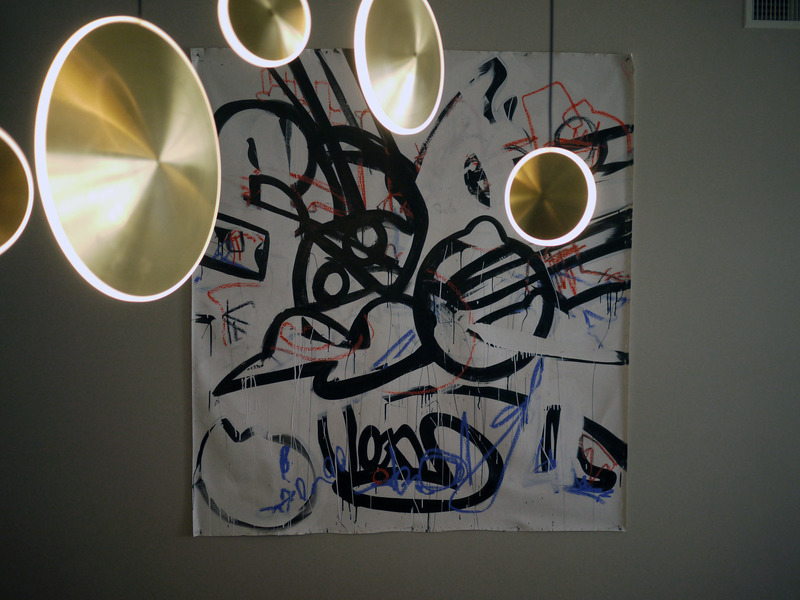 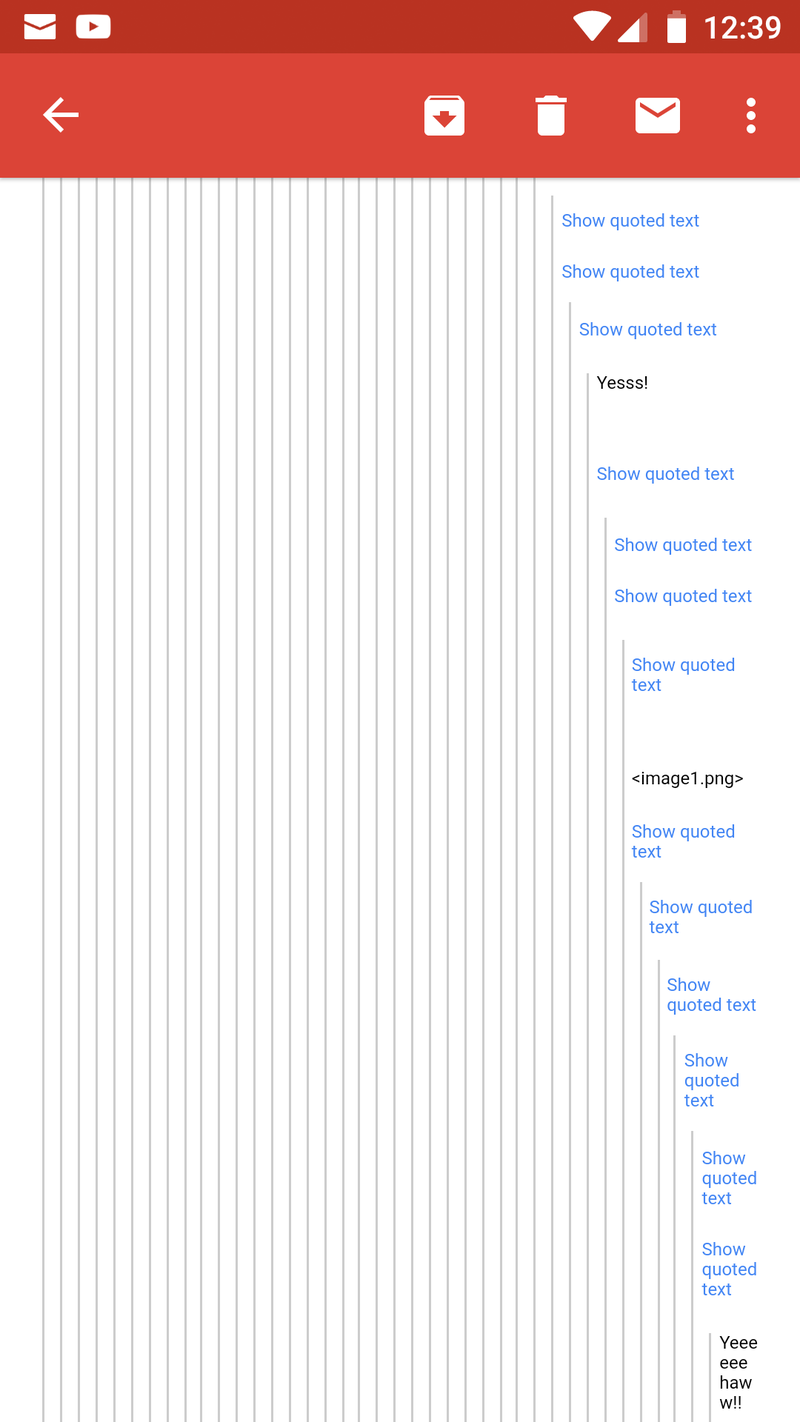