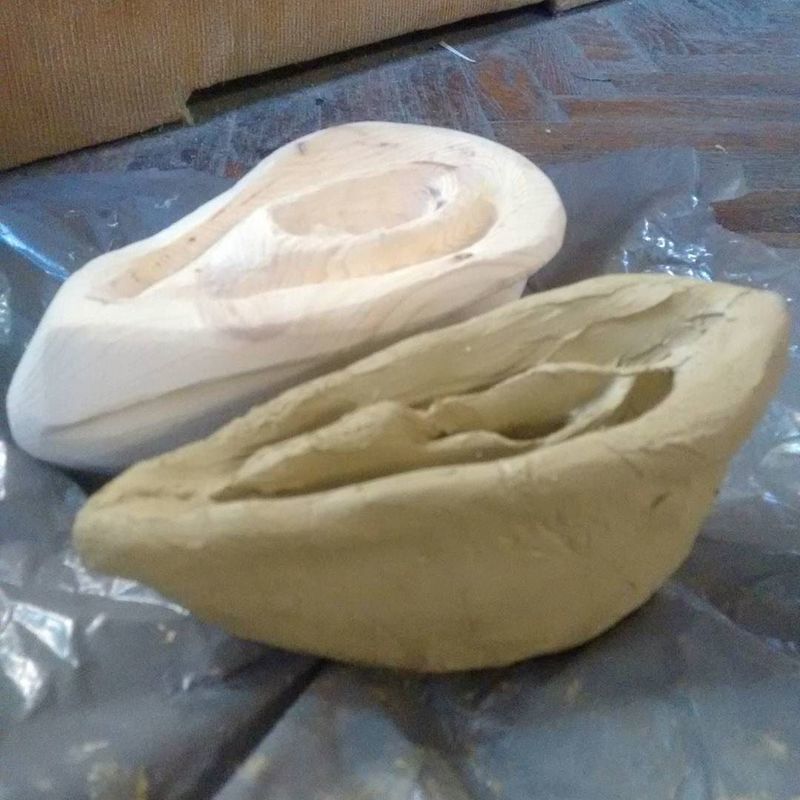 I’m currently working on making mantel versions of my piece “the ineffective ways we choose to measure time”. You can see the test of the first one here: http://markvonrosenstiel.posthaven.com/cock-first-run. (Also: “mantel version” refers to the fact that this version is more mobile than the original, which seems to imply to me that, as a timepiece, the mantel would be an appropriate place for it to live. I’m planning on making a wearable wrist version soon).

I decided I really wanted to make a his and hers version of the piece, so I started working on a wooden vagina. This is the reason why I found myself watching the sun rise this morning on the roof of the building where my studio is, angle grinder in hand, getting a vagina to appear out of a block of wood. And as I sat there in the sun (realizing how hard it is to find a vagina in a block of wood, even after I had previously sculpted one in clay to figure out all the bits and pieces. My clay endeavor was accompanied by internet research and I have to say that finding anatomical pictures of a vagina on the internet is actually a somewhat difficult thing, given that they are awash in a sea of porn.) I started to think about how different it is as a piece to have a vagina versus a penis hitting a rock.

I don’t think it’s really even important to talk about the concept of the original piece, but if I think about the act of a wooden vagina hitting a rock, versus a wooden penis hitting a rock, the first seems so much more complex than the second. (These next sentences very much illustrate how I, at this particular moment, thought about relationships of men to their cocks, versus women to their vaginas. I guess what I’m saying is I’m not making these statements as some general statements. They’re just the things flying through my head while I’m carving a vagina on a roof in the sun.) Sitting there, flap sanding disc spinning away, it occurred to me that seeing a wooden vagina hitting a rock made me think about almost the exact opposite thing that the wooden penis did.

A wooden vagina hitting a rock seems to say to me “if only it was just as simple as this”, where the wooden penis says, “fuck, I act like it’s as simple as this”. Vaginas (see Jamie McCartney’s piece if you really want to marvel at all the different vaginas out there), and how I hear women talk about their vaginas, are tied to so much more than a penis is. Or, more precisely, they are tied to a larger array of things outside of sex. I guess I can’t always choose what the thing I make is about. The concept jumps out of the box. See that? A pun.

And there is a last piece to this. Before settling on a vagina, I was going to carve a woman’s torso, with legs spread. I realized a bit of time into this process that this representation of a vagina, attached to a body, really started to change the meaning of the piece (because it was attaching the vagina to a unidentifiable, yet present, woman), and that it started to take on a meaning that was pretty fucking awful. So I thankfully scrapped that before it got too far along. But there was a silver lining in that I’d never carved/sculpted a woman’s torso before. And man-oh-man is the area where the butt, hip and quad come together on a woman a fucking Ferrari of lines.

Friends that are in art school talk about studying anatomy and I’ve always thought it was sort of silly: diving into a very scientific set of ideas when all they were doing was drawing something that they can physically see. But as I was sitting trying to get the curve of a hip, to match into the plane of the butt, while still taking into account the quad, I was perplexed. I was looking at the image of the woman on my computer screen, and fixating on a line that ran along her ab and down onto the inside of her quad, which is visibly there, but as I took it to be my point of reference, everything else got all wonky. And then it dawned on me how the muscle of the quad slides up and over to the outside of the hip (medical people, don’t go crazy here. I know this is sorta maybe not exactly how it works, but just think about how you would drive along from muscle to muscle, if you were a racecar, and then you will be pleasantly on the same page as me). It’s like I was trying to draw a cursive “s” and then “a” by drawing half of the “s”, and then all of the “a", before jumping back to finish the “s”. A total mess. But once I could see in my head the muscle and how it attached into the butt and how the abs came down, it was so easy to picture all the planes coming together. And sculpting the body got to be bliss.

And it made me think that a woman’s hip is sort of like a hypothesis for a theory of how part of the world works. I could come up with lines that I thought were important to describe how all the planes of skin came together, but they were difficult to use, and didn’t seem to bring the being, the hip, into some sort of simplicity. But with the lines that the muscle groups revealed, the being, the hip, became so simple. So next time I’m trying to figure out some structure in the world and I find myself at a loss, I’m going to think of the little spot where a woman’s hip, butt, and quad come together. It is an illuminating spot.